Because of the current economic situation in Alaska, the Board thinks it is in the best interest of the Museum to extend the project timeline until the economic climate improves. Work on the project will continue with existing funds. The design and construction documents will be completed this summer, and updated drawings will be posted when they are available. To take advantage of the competitive construction environment, we plan to complete the site work as soon as possible. We expect to prepare the building site, move the shop, add parking, and create a connection to Spruceview Avenue. We will keep you informed of the progress on the project as we move forward.

If you have any questions, please contact the board of directors via office@prattmuseum.org. We thank all of our donors and supporters for your generous gifts to the Museum, and we hope that you will continue to support our important work in the future.

The Pratt Museum is pleased to announce that, thanks to a benevolent anonymous donor, its 9.8 acres of wooded property has increased to over 10 acres. A generous financial gift was presented to the museum in December 2015, and the property was purchased soon thereafter.

Situated between the Legislative Information Office and Hopped Up Espresso, this new addition connects the Pratt’s grounds directly to Pioneer Avenue. To honor Woodard Creek and extend its trail system, the Pratt will work to pull a crew together to build a trail extension down to Pioneer Avenue along the creek, which flows through the property.

If you’d like to sign up to help with trail work this spring, please email to office@prattmuseum.org, stop by the front desk, or call the Pratt Museum at 235-8635. 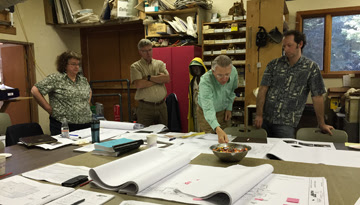 This month was a busy one for building design. A two-day workshop with the architects, engineers, building committee and staff was held to discuss systems for managing temperature and humidity (a very important consideration for collections care and conservation), lighting, flooring, ceiling forms and dozens of other structural and functional considerations.

Work on design details will continue through the fall, and the capital campaign continues with staff and committee members meeting with prospective major donors and foundation funders.

Just in: Updated Renderings of the Building Exterior, Floor Plan, and Site!

Over the past few months, Pratt project architects, engineers and staff have been developing the new building design and site plan.

One change to the previous schematic design includes the location of air handling systems, creating a new roof line. Tweaks have also been made to remove the need for pillars in the main gallery and gain more overhead space for the gray whale. To better account for existing slopes and handicapped access, the Phase 1 Site Plan has been modified.

Substantive planning work on aquaria and exhibit design is in the works and we’ll have some exciting drawings to show off very soon! Exhibit design will continue through 2016.

Fundraising also continues. We expect the State’s budget situation will delay the construction timeline. We are working on other sources of funding in lieu of the remaining piece of the State appropriation that was originally requested.

As we move forward on the Capital Project and architectural work for the new Pratt Museum, the design and curatorial team are already at work developing exhibits to fill this exciting new space. We invite you to be a part of this process!

Over the next 18 months, the lower galleries will feature a series of prototype exhibits to invite your feedback. These are works in progress and need your input as we refine them into permanent installations.

Currently on display is “Community Connectors: Radios, Telephones and Pathways.” Please stop by and let us know what you think or if you can help contribute to the story.

Additionally, you can visit a new section of our website on the Master Exhibit Plan and see what we’re looking for right now—be it stories, artifacts, photographs, or information on materials in the Pratt’s collection. We’ll also use this area to post future public meetings and feedback sessions about the exhibit development process.

Thank you for being a part of the Pratt!

Delegates from Alaska State Council on the Arts, Alaska Humanities Forum, Museums Alaska and Alaska Historical Society met in Juneau on January 28 and 29, where they participated in advocacy training, gave a luncheon presentation at the capitol, and met with legislators.

To address this need, the Museums Alaska delegation asked Representative Bob Herron to sponsor a bill to establish a Museum Construction, Expansion, and Major Renovation Matching Grant Program. This legislation, HB 52, mirrors an existing program for libraries, providing matching grants to those selected from the prioritized list of projects around the state, based on their readiness.

While in Juneau, 15 Museums Alaska advocates met with over 30 legislators and staff to educate them about the issues and gauge their support of the bill. Legislators were generally supportive of the concept, particularly because it carries a zero fiscal note. Senator Gary Stevens has filed a companion bill, SB 61. Please thank Representative Herron, rep.bob.herron@akleg.gov,and Senator Stevens sen.gary.stevens@akleg.gov, for their leadership in sponsoring the legislation.

Once the bill has been scheduled, public testimony will be taken and we will send an eblast as to time and date. Please contact Michele Miller, mmiller@prattmuseum.org, for more information.

Senator Stevens visited Homer Monday and Tuesday, March 9 and 10, at which time he briefed the Board members and staff on the state’s financial status. This year’s capital budget will be minimal in comparison to previous years. Only critical projects will be funded. It is unlikely that the Pratt will receive capital funds this year.

This Fall the architects and engineers begin refining the building design and are working towards construction drawings. Thanks to a grant from the National Endowment for the Humanities,the exhibit designer is at work translating the exhibit concept work from the last year into detailed designs. The architect and exhibit designer met with staff in September to begin coordination of structural elements in the exhibit spaces. We look forward to a busy winter developing design details and preparing for the initial site work.

Part of the long-term vision for the Pratt grounds includes daylighting the section of Woodard Creek that currently runs through a culvert under the parking area behind the museum building. This project is in the planning stages now so that it meshes with the site work plans for the capital project to build a new museum building. Opening up this 150 foot section of creek will make a dramatic change in visitor experience, providing stream-based education opportunities as well as benches and outdoor gathering spaces near the creek. Design considerations begin with handling both low and high water flows.

Watch the video to learn more about the project and the different configurations that the stream design may take.

We are currently seeking feedback on the design concept including the placement and type of drop structures (there is an 11′ elevation change over the length of the culvert), and the stream bed profile. We are also beginning to consider vegetation options. This video shows several possible structures and gives a sense of what they might look and sound like. We are collecting feedback on the concept through April 25th. Please send you comments to director@prattmuseum.org, drop them by the museum, or mail to Pratt Museum, 3779 Bartlett Street Homer, AK 99603. Thank you.

At the Museums Alaska annual conference in Haines last month, the Pratt Museum was honored as the recipient of the association’s Excellence in the Museum Profession Award for the Gray Whale Project. This is the only exhibit or project award given by the association, and recognizes the Pratt once again as a leader among the state’s 80-plus museum institutions.

“More than just an exemplary exhibit, the Pratt Museum’s Encounters: Whales in Our Waterssurpassed the level of public involvement and investment normally considered possible in a community museum exhibition,” said Museums Alaska President Angela Linn. The exhibit project started 14 years ago, in 1999, when museum volunteers collected the carcass of a juvenile gray whale found in Kachemak Bay. Its bones were cleaned by volunteers, catalogued by visiting students, conserved, studied, and finally, during the summer of 2012, articulated under the guidance of local bone expert, Lee Post. In January 2013, the large components (backbone, tail section, skull, flippers), were transported by more volunteers, who carried them into the special exhibits gallery where the whale was suspended—whole again after 13 years.

The only shortcoming to Encounters is that it was, in fact, too short. Although this exhibit lasted six months (longer than any recent exhibit at the Pratt) and caught the early summer visitors, many urged for it to stay in place indefinitely. Luckily, the gray whale’s role in community building is not done. In a couple of years, many of those volunteers are hoped to return to help move their 1773-pound whale once again. When the museum throws open the doors of a new building, the whale will be waiting, in a new permanent installation, to greet its many supporters.

Since completion of schematic design last fall, the Board, capital campaign committee and staff are hard at work on fundraising and exhibit planning. The campaign is focusing on leadership gifts from individuals, foundations, and corporations. The public campaign is expected to begin next winter. Although a substantive amount of work remains, the campaign is right on track, receiving positive responses and pledges of support from key foundations and individuals.

We plan to resume the design process with the architects later this year, once the exhibit layout is completed this summer and major elements have been set in place. We do know the gray whale skeleton will be placed in a prominent location at the entryway to the new galleries. Exhibit design and fabrication will continue over the next two years. Also on the horizon for late this year: the start of planning for the art pieces that will be incorporated into the building design.

Thank you to the community for your continued and valued support of the Pratt Museum’s capital project.

Seed Saving and Other Methods of Propagating Wild Plants

The exhibit is open from June 11 to September 24, … END_OF_DOCUMENT_TOKEN_TO_BE_REPLACED